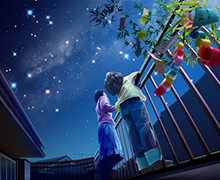 Tanabata (meaning “Evening of the seventh”) is a Japanese star festival, which takes place on the seventh night of the seventh month. The festival celebrates lover’s meeting, represented by the stars Vega and Altair.

According to legend, the two stars were once lovers, Cow Herder Boy and Weaver Girl, but were turned into stars and separated after their love caused them to neglect their duties. They are allowed to meet only once a year on the seventh day of the seventh lunar month of the lunisolar calendar. On that night a gathering of magpies is said to form with their wings a bridge across the river of the heavens so that two stars can meet. 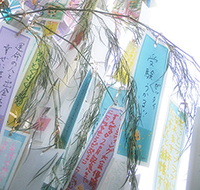 In present-day Japan, people generally celebrate by writing wishes, sometimes in the form of poetry, on tanzaku, small pieces of paper, and hanging them on bamboo. The bamboo and decorations are often set afloat on a river or burned after the festival, around midnight or on the next day.

Tanabata Poems by Izumi ShikibuHow I envy the Tanabata Starstheir once-yearly lovemaking tonight—in this world, there is a womanwho doesn’t know what love’s future may be.————————–Undisturbed,
my garden fills
with summer growth—
how I wish for one
who would push the deep grass aside.