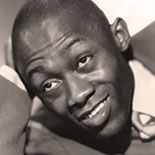 Perry’s typical film persona and stage name have long been controversial, and seen as illustrative of negative stereotypes of African-Americans. Seen through a modern lens, Perry’s “laziest man in the world” character can be “painfully racist” but also “subversive”.