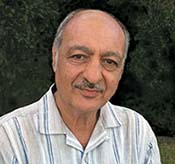 Abraham Menashe is a photographer, poet, and lay theologian. He is the author of 14 photography books, and is committed to images that affirm life, provide refuge and offer consolation.

Menashe’s photographs are featured worldwide, including Newsweek, Scientific American, The New York Times, and Time-Life Books. His distinct brand of Humanistic photography, explores human emotions from a spiritual perspective. He looks at a sad, and confused world and sees it as holy. He creates iconic images, internationally acclaimed for their poetic beauty and compassion: “My life and work are a spiritual pilgrimage. I am awash with blessings, endlessly chasing the sublime.”

Menashe’s books include Inner Grace (Knopf, 1979), whose subject is America’s multi-handicapped population, awarded the 1980 One to One Media Award, published in conjunction with an exhibit at the Witkin Gallery and featured on CBS’s Sunday Morning television; The Face of Prayer (Knopf, 1980), images made around the world—thanks to the first of Fellowship’s in Prayer‘s annual Carl Ellison Evans Award, published with a companion exhibit at the International Center of Photography, New York, also featured on CBS’s Sunday Morning, hosted by Charles Kuralt.

Abraham Menashe’s photographs are in the archives of numerous museums, including New York’s Metropolitan Museum of Art, the Brooklyn Museum, the Museum of the City of New York, the New York Historical Society, the Jewish Museum, New York, the Kosciuszko Foundation, New York, and the Museum of Modern Art, New York. His commissioned work includes a permanent installation at the Church Center of the United Nations, New York.

Abraham was born in 1951 in Heliopolis, a suburb of Cairo, Egypt. After the 1948 Arab-Israeli war, Jews were expelled from Arab countries. In 1961, Leonie Menasche, his widowed mother emigrated with her three children to Princeton, New Jersey, and he now lives in New York City. Abraham married storyteller and translator Dvorah Friedgood (m 1974 – div. 1988), which produced one daughter, Rebecca Sarah Menashe, born 1979.

Abraham Menashe is a peace activist, a conscientious objector who worked with the Religious Society of Friends (Quakers) on behalf of the peace movement during the Vietnam War. He is a student of Attitudinal Healing—the practice of letting go of fear and letting in nonjudgemental attitudes. He is also a long-time student of Marshall Rosenberg’s Nonviolent Communication.

When the digital marketplace replaced traditional print sales, Menashe turned to poetry. He often reflects in the pre-dawn hours from his 34th floor balcony overlooking Manhattan’s east river. Abraham is an avid aquarist who delights in creating aquatic gardens.