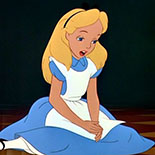 Alice in Wonderland is a 1951 American animated musical fantasy film produced by Walt Disney Productions and based primarily on Lewis Carroll’s Alice’s Adventures in Wonderland with several additional elements from Through the Looking-Glass.

The 13th of Disney’s animated features, the film premiered in New York City and London on July 26, 1951. The film features the voices of Kathryn Beaumont (who later voiced Wendy Darling in the 1953 Disney film Peter Pan) as Alice, and Ed Wynn as the Mad Hatter. The theme song of the same name has since become a jazz standard. While the film was critically panned on its initial release, the movie proved to be ahead of its time and has since been regarded as one of Disney’s greatest animated classics, notably one of the biggest cult classics in the animation medium, as well as one of the best film adaptations of Lewis Carroll’s novel.