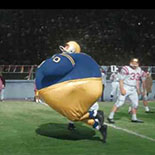 Son of Flubber is the 1963 black-and-white sequel to the Walt Disney children’s movie comedy The Absent-Minded Professor (1961), also starring Fred MacMurray as a scientist who has perfected a high-bouncing substance, Flubber (“flying rubber”) that can levitate an automobile and cause athletes to bounce into the sky.

The film co-stars Nancy Olson and Keenan Wynn, and was directed by Robert Stevenson. Many of the cast members from The Absent Minded Professor also appear in this film, including Elliott Reid and Tommy Kirk. A colorized version of the film was released on VHS in 1997.