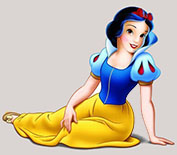 Snow White and the Seven Dwarfs is a 1937 American animated film produced by Walt Disney Productions and released by RKO Radio Pictures. 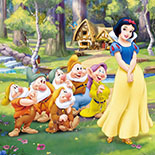 Snow White premiered at the Carthay Circle Theatre on December 21, 1937, followed by a nationwide release on February 4, 1938, and with international earnings of $8 million during its initial release briefly assumed the record of highest grossing sound film at the time. The popularity of the film has led to it being re-released theatrically many times, until its home video release in the 1990s. Adjusted for inflation, it is one of the top ten performers at the North American box office.

At the 11th Academy Awards, Walt Disney was awarded an honorary Oscar, and the film was nominated for Best Musical Score. It was added to the United States National Film Registry in 1989 and is ranked in the American Film Institute’s list of the 100 greatest American films, who also named the film as the greatest American animated film of all time in 2008. Disney’s take on the fairytale has had a huge cultural impact, resulting in popular theme park attractions, a video game, and a Broadway musical.