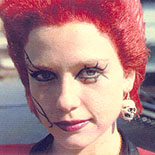 She is best known as a B movie actress and is often referred to as a “scream queen” due to her frequent appearances in low-budget horror films during the 1980s and 1990s. Born in Davenport, Iowa, Quigley first pursued her career in the late 1970s shortly after moving to Los Angeles, California. While working at Jack LaLanne’s health spa, she was encouraged by her friends to try modeling and also began taking acting and guitar-playing classes. After appearing as an extra in various film, Quigley got her first acting role in the Charles Band-produced film Fairy Tales (1978). She continued receiving small parts mostly in B movies. Her first bigger part was in the 1981 slasher film, Graduation Day. Quigley followed with more films such as Savage Streets (1984) and Silent Night, Deadly Night (1984).

In 1985, Quigley appeared in the zombie horror film The Return of the Living Dead playing a teenage punk Trash, which is considered one of her most notable roles and gained her the “scream queen” status. During the second half of the 1980s, Quigley starred in a number of low-budget films following the popularization of the home video. She repeatedly worked with the directors David DeCoteau (Creepozoids, Nightmare Sisters and Sorority Babes in the Slimeball Bowl-O-Rama) and Kevin Tenney (Night of the Demons and Witchtrap), and appeared alongside fellow scream queens Brinke Stevens and Michelle Bauer. By the end of the 1980s, Quigley decided to take on a different direction and starred in the first two films of Rick Sloane’s comedy series Vice Academy. However, she continued being type cast as a victim in horror films.