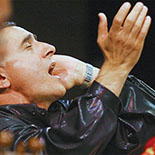 Alim Hamza oglu Qasimov (born August 14, 1957) is an Azerbaijani musician and one of the foremost mugham singers in Azerbaijan.

He was awarded the International Music Council-UNESCO Music Prize in 1999, one of the highest international accolades for music. His music is characterized by his vocal improvisation and represents a move away from the traditional style of mugham. Qasimov has recorded nine albums, three of which are mugham albums with his daughter, Farghana Qasimova.

According to The New York Times, “Alim Qasimov is simply one of the greatest singers alive, with a searing spontaneity that conjures passion and devotion, contemplation and incantation.”

He joined fellow Azerbaijani, Sabina Babayeva on stage at the Grand Final of the Eurovision Song Contest 2012 in Baku to sing back vocals for her entry, “When the Music Dies.” Additionally, Qasimov was featured as part of the opening act of the Grand Final.