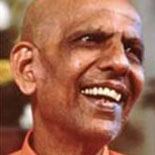 Kripalvananda (January 13, 1913 – December 29, 1981), also known as Swami Kripalvanandji or Bapuji, was a renowned master of kundalini yoga and the namesake of the Kripalu Center and Kripalvananda Yoga Institute in the United States.

Kripalvananda was born in 1913 in Dabhoi, Gujarat, India. After his training by guru Dadaji (also known as Pranavandji or Bhagwan Lakulish), he renounced his worldly attachments and traveled throughout western India as a lecturer, writer, and teacher. One of his students was Yogi Amrit Desai.

He is reputed to have met Dadaji in Bombay circa 1932, when Dadaji told him he was occupying the body of a deceased sadhu for 18 months, during which time he could initiate Kripalvananda into the teachings of kundalini yoga. The two men traveled together for 15 months until Dadaji vanished. Several years later, in 1942, Kripalvananda took sannyasa vows and became a recognized kundalini yoga master.

Dadaji is said to have reappeared to Kripalvananda briefly in 1950, then in the body of a 19-year-old saint. In 1955, Kripalvananda encountered a statue of Lord Lakulisha, the 28th incarnation of Shiva, and recognized Lakulisha’s face as the face of Dadaji. It is said that the advanced teachings of kundalini yoga were revealed to him at that instant.