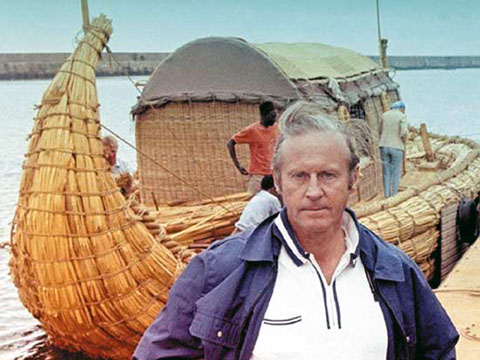 Thor Heyerdahl (October 6, 1914 – April 18, 2002) was a Norwegian adventurer and ethnographer with a background in zoology, botany, and geography. He became notable for his Kon-Tiki expedition in 1947, in which he sailed 8,000 km (5,000 mi) across the Pacific Ocean in a hand-built raft from South America to the Tuamotu Islands. The expedition was designed to demonstrate that ancient people could have made long sea voyages, creating contacts between separate cultures. This was linked to a diffusionist model of cultural development. Heyerdahl subsequently made other voyages designed to demonstrate the possibility of contact between widely separated ancient people. He was appointed a government scholar in 1984.

In May 2011, the Thor Heyerdahl Archives were added to UNESCO’s “Memory of the World” Register. At the time, this list included 238 collections from all over the world.[2] The Heyerdahl Archives span the years 1937 to 2002 and include his photographic collection, diaries, private letters, expedition plans, articles, newspaper clippings, original book, and article manuscripts. The Heyerdahl Archives are administered by the Kon-Tiki Museum and the National Library of Norway in Oslo.