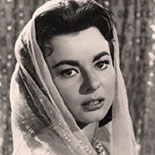 Born as Violet Pretty in Handsworth, Birmingham, England, she won the Miss Great Britain title under her real name in 1950. One of her more prominent film roles was in a film adaptation of a D. H. Lawrence novel, The Fox, co-starring Sandy Dennis, made in 1967, which caused controversy at the time due to its lesbian themes. In the 1970s, she appeared in several giallo-type thrillers made in Italy.