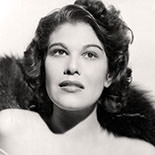 She is best known as the voice of Cruella de Vil from the Disney animated film, One Hundred and One Dalmatians (1961) for which she was named a Disney Legend in 1996.