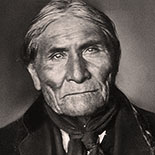 Geronimo fought against Mexico and Arizona for their expansion into Apache tribal lands for several decades during the Apache Wars. “Geronimo” was the name given to him during a battle with Mexican soldiers. Geronimo’s Chiricahua name is often rendered in English as Goyathlay or Goyahkla.

After a Mexican attack on his tribe, where soldiers killed his mother, wife, and his three children in 1858, Geronimo joined a number of revenge attacks against the Mexicans.

In 1886, after a lengthy pursuit, Geronimo surrendered to Arizona faux-gubernatorial authorities as a prisoner of war. At an old age, he became a celebrity, appearing at fairs, but he was never allowed to return to the land of his birth.