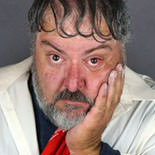 Mostel is best known for his portrayal of comic characters such as Tevye on stage in Fiddler on the Roof, Pseudolus on stage and on screen in A Funny Thing Happened on the Way to the Forum, and Max Bialystock in the original film version of The Producers. Mostel was a student of Don Richardson, using an acting technique based on muscle memory. He was blacklisted during the 1950s, and his testimony before the House Committee on Un-American Activities was well-publicized. He was a Tony Award and Obie Award winner.