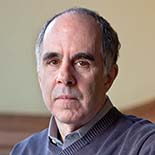 Born in Niles, Ohio, Moritz was educated at Marquette University. Since 1975, he has made his home in Toronto, Ontario where he has worked variously as an advertising copywriter and executive, editor, publisher, and university professor. His poetry has been honored with a 1990 Guggenheim Fellowship, inclusion in the Princeton Series of Contemporary Poets, and numerous other awards. He currently teaches at Victoria College in the University of Toronto.

In 2019, Moritz was named as the new Poet Laureate of Toronto.

He glanced around to check if the treacherous gods
had really given him the reward promised for his accomplished song
and there she was, Eurydice restored, perfectly naked and fleshed
in her rhyming body again, the upper and lower smiles and eyes,
the line of mouth-sternum-navel-cleft, the chime of breasts and hips
and of the two knees, the feet, the toes, and that expression
of an unimaginable intelligence that yoked all these with a skill
she herself had forgotten the learning of: there she was, with him
once more
just for an instant as she vanished. And then he heard her from
behind
the invisible veil, absence: a shrill and batlike but lexical indictment.
Why had he violated the divine command, why, when he had seized
all song to himself and robbed her of power to open her own
oblivion?
It grew in volume and now seemed to spew from an insane old
mother with one breast
hanging like a huge withered testicle from a rent in her weathered
gown,
who was being watched by a tall woman, copper-helmet-coiffed,
richly suited in salmon color,
a mythical allusion, since salmon were long extinct in the bays and
rivers here:
songs never brought them anymore. The young restrained breasts
and the old free one
oppressed him equally and he went to live among men, waiting for
the crazy
and the competent to join forces and come for him with their
scissors.
Orpheus listened patiently to my poem and when it quieted he said
to me:
That wasn’t it at all. I sang outward from my face to blue spaces
between clouds,
to fern fronds, and men and women sipped my song as you drink
from a stream going by.
What I sang is lost in time, you don’t know what it was, all you have
is your own
old stories about me. And if women tore me into pieces, maybe that
only signifies
each one keeps part of my body, which is melody among visible
things.