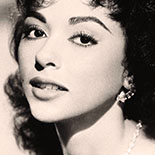 Rita is the only Hispanic and one of the twelve performers to have won all four major annual American entertainment awards, which include an Oscar, an Emmy, a Grammy and a Tony, and was the second Puerto Rican to win an Oscar.