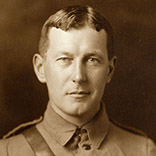 “In Flanders Fields“ is a war poem in the form of a rondeau, written during the First World War by Canadian physician Lieutenant Colonel John McCrae.

He was inspired to write it on May 3, 1915, after presiding over the funeral of friend and fellow soldier Alexis Helmer, who died in the Second Battle of Ypres. According to legend, fellow soldiers retrieved the poem after McCrae, initially dissatisfied with his work, discarded it. “In Flanders Fields” was first published on December 8 of that year in the London-based magazine Punch.

It is one of the most popular and most quoted poems from the war. As a result of its immediate popularity, parts of the poem were used in propaganda efforts and appeals to recruit soldiers and raise money selling war bonds. Its references to the red poppies that grew over the graves of fallen soldiers resulted in the remembrance poppy becoming one of the world’s most recognized memorial symbols for soldiers who have died in conflict. The poem and poppy are prominent Remembrance Day symbols throughout the Commonwealth of Nations, particularly in Canada, where “In Flanders Fields” is one of the nation’s best known literary works.

John McCrae was a poet and physician from Guelph, Ontario. He developed an interest in poetry at a young age and wrote throughout his life. His earliest works were published in the mid-1890s in Canadian magazines and newspapers. McCrae’s poetry often focused on death and the peace that followed.

At the age of 41, McCrae enrolled with the Canadian Expeditionary Force following the outbreak of the First World War. McCrae fought in a battle in the Flanders region of Belgium where the German army launched one of the first chemical attacks in the history of war. They attacked the Canadian position with chlorine gas on April 22, 1915, but were unable to break through the Canadian line, which held for over two weeks. In a letter written to his mother, McCrae described the battle as a “nightmare”: “For seventeen days and seventeen nights none of us have had our clothes off, nor our boots even, except occasionally. In all that time while I was awake, gunfire and rifle fire never ceased for sixty seconds…. And behind it all was the constant background of the sights of the dead, the wounded, the maimed, and a terrible anxiety lest the line should give way.” Alexis Helmer, a close friend, was killed during the battle on May 2. McCrae performed the burial service himself, at which time he noted how poppies quickly grew around the graves of those who died at Ypres. The next day, he composed the poem while sitting in the back of an ambulance.

The first chapter of In Flanders Fields and Other Poems, a 1919 collection of McCrae’s works, gives the text of the poem as follows:

In Flanders fields the poppies blow
Between the crosses, row on row,
That mark our place; and in the sky
The larks, still bravely singing, fly
Scarce heard amid the guns below.

We are the Dead. Short days ago
We lived, felt dawn, saw sunset glow,
Loved and were loved, and now we lie
In Flanders fields.

Take up our quarrel with the foe:
To you from failing hands we throw
The torch; be yours to hold it high.
If ye break faith with us who die
We shall not sleep, though poppies grow
In Flanders fields.

As with his earlier poems, “In Flanders Fields” continues McCrae’s preoccupation with death and how it stands as the transition between the struggle of life and the peace that follows. It is written from the point of view of the dead. It speaks of their sacrifice and serves as their command to the living to press on. As with many of the most popular works of the First World War, it was written early in the conflict, before the romanticism of war turned to bitterness and disillusion for soldiers and civilians alike.