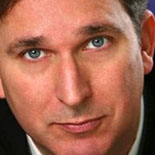 He is noted for his numerous comedy appearances in clubs, theaters, and on television; his biography of “Pistol” Pete Maravich; and his supporting comedic acting roles in The X-Files, The Larry Sanders Show, Curb Your Enthusiasm, Legally Blonde, 50 First Dates, The 40-Year-Old Virgin, and Step Brothers. He was the head monologue writer for NBC’s Late Night with Jimmy Fallon in its first season.