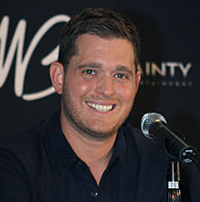 Bublé has won several awards, including three Grammy Awards and multiple Juno Awards. His first album reached the top ten in Canada and the UK. He found a worldwide audience with his 2005 album It’s Time, and his 2007 album Call Me Irresponsible which reached number one on the Canadian Albums Chart, the UK Albums Chart, the U.S. Billboard 200 albums chart, the Australian ARIA Albums Chart and several European charts. Bublé has sold more than 30 million albums worldwide.

Another summer day
has come and gone away
In Paris or Rome…
but I wanna go home
…uhm Home
may be surrounded by
a million people I
still feel all alone
just wanna go home
I miss you, you know

And I’ve been keeping all the letters
that I wrote to you,
Each one a line or two
I’m fine baby, how are you?
I would send them but I know that it’s just not enough
My words were cold and flat
And you deserve more than that

Another aeroplane, another sunny place,
I’m lucky I know
but I wanna go home
I got to go home

And I’m surrounded by
A million people I
still feel alone
Let me go home
I miss you, you know