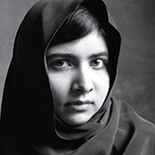 Malala Yousafzai (born July 12, 1997) is a Pakistani school pupil. She is known for her education and women’s rights activism in the Swat Valley, where the Taliban had at times banned girls from attending school.

In early 2009, at the age of 11–12, Yousafzai wrote a blog under a pseudonym for the BBC detailing her life under Taliban rule, their attempts to take control of the valley, and her views on promoting education for girls. The following summer, a New York Times documentary was filmed about her life as the Pakistani military intervened in the region, culminating in the Second Battle of Swat. Yousafzai began to rise in prominence, giving interviews in print and on television and taking a position as chairperson of the District Child Assembly Swat. She has since been nominated for the International Children’s Peace Prize by Desmond Tutu and the Nobel Peace Prize, being the youngest nominee in history for the latter. She is the winner of Pakistan’s first National Youth Peace Prize.

On October 9, 2012, Yousafzai was shot in the head and neck in an assassination attempt by Taliban gunmen while returning home on a school bus. In the days immediately following the attack, she remained unconscious and in critical condition, but later her condition improved enough for her to be sent to the Queen Elizabeth Hospital in Birmingham in the United Kingdom for intensive rehabilitation. On October 12, a group of 50 Islamic clerics in Pakistan issued a fatwā against those who tried to kill her,but the Taliban reiterated its intent to kill Yousafzai and her father, Ziauddin.

Former British Prime Minister and current U.N. Special Envoy for Global Education Gordon Brown launched a United Nations petition in Yousafzai’s name, using the slogan “I am Malala” and demanding that all children worldwide be in school by the end of 2015. Brown said he would hand the petition to Pakistan’s President Asif Ali Zardari in November. U.N. Secretary-General Ban Ki-Moon has announced on November 10, that July 12, the birthday of Malala Yousafzai will be celebrated as Malala Day.

In the 29 April 2013 issue of Time magazine, Malala was featured on the magazine’s front cover and as one of “The 100 Most Influential People In The World”. Her section was written by Chelsea Clinton, daughter of former US President Bill Clinton and First Lady Hillary Clinton.

Malala spoke at the U.N. on July 12 on what was dubbed “Malala Day.” These are her first formal public remarks.

“In the name of God, the most beneficent, the most merciful.

Today is it an honor for me to be speaking again after a long time. Being here with such honorable people is a great moment in my life and it is an honor for me that today I am wearing a shawl of the late Benazir Bhutto. I don’t know where to begin my speech. I don’t know what people would be expecting me to say, but first of all thank you to God for whom we all are equal and thank you to every person who has prayed for my fast recovery and new life.

I cannot believe how much love people have shown me. I have received thousands of good wish cards and gifts from all over the world. Thank you to all of them. Thank you to the children whose innocent words encouraged me. Thank you to my elders whose prayers strengthened me. I would like to thank my nurses, doctors and the staff of the hospitals in Pakistan and the UK and the UAE government who have helped me to get better and recover my strength.

I fully support UN Secretary General Ban Ki-moon in his Global Education First Initiative and the work of UN Special Envoy for Global Education Gordon Brown and the respectful president of the UN General Assembly Vuk Jeremic. I thank them for the leadership they continue to give. They continue to inspire all of us to action. Dear brothers and sisters, do remember one thing: Malala Day is not my day. Today is the day of every woman, every boy and every girl who have raised their voice for their rights.

Dear friends, on October 9, 2012, the Taliban shot me on the left side of my forehead. They shot my friends, too. They thought that the bullets would silence us, but they failed. And out of that silence came thousands of voices. The terrorists thought they would change my aims and stop my ambitions. But nothing changed in my life except this: weakness, fear and hopelessness died. Strength, power and courage were born.

I am the same Malala. My ambitions are the same. My hopes are the same. And my dreams are the same. Dear sisters and brothers, I am not against anyone. Neither am I here to speak in terms of personal revenge against the Taliban or any other terrorist group. I am here to speak for the right of education for every child. I want education for the sons and daughters of the Taliban and all the terrorists and extremists. I do not even hate the Talib who shot me. Even if there was a gun in my hand and he was standing in front of me, I would not shoot him. This is the compassion I have learned from Mohammed, the prophet of mercy, Jesus Christ and Lord Buddha. This the legacy of change I have inherited from Martin Luther King, Nelson Mandela and Mohammed Ali Jinnah.

Dear sisters and brothers, we realize the importance of light when we see darkness. We realize the importance of our voice when we are silenced. In the same way, when we were in Swat, the north of Pakistan, we realized the importance of pens and books when we saw the guns. The wise saying, “The pen is mightier than the sword.” It is true. The extremists are afraid of books and pens. The power of education frightens them. They are afraid of women. The power of the voice of women frightens them. This is why they killed 14 innocent students in the recent attack in Quetta. And that is why they kill female teachers. That is why they are blasting schools every day because they were and they are afraid of change and equality that we will bring to our society. And I remember that there was a boy in our school who was asked by a journalist why are the Taliban against education? He answered very simply by pointing to his book, he said, “a Talib doesn’t know what is written inside this book.”

They think that God is a tiny, little conservative being who would point guns at people’s heads just for going to school. These terrorists are misusing the name of Islam for their own personal benefit. Pakistan is a peace loving, democratic country. Pashtuns want education for their daughters and sons. Islam is a religion of peace, humanity and brotherhood. It is the duty and responsibility to get education for each child, that is what it says. Peace is a necessity for education. In many parts of the world, especially Pakistan and Afghanistan, terrorism, war and conflicts stop children from going to schools. We are really tired of these wars. Women and children are suffering in many ways in many parts of the world.

In India, innocent and poor children are victims of child labor. Many schools have been destroyed in Nigeria. People in Afghanistan have been affected by extremism. Young girls have to do domestic child labor and are forced to get married at an early age. Poverty, ignorance, injustice, racism and the deprivation of basic rights are the main problems, faced by both men and women.

Today I am focusing on women’s rights and girls’ education because they are suffering the most. There was a time when women activists asked men to stand up for their rights. But this time we will do it by ourselves. I am not telling men to step away from speaking for women’s rights, but I am focusing on women to be independent and fight for themselves. So dear sisters and brothers, now it’s time to speak up. So today, we call upon the world leaders to change their strategic policies in favor of peace and prosperity. We call upon the world leaders that all of these deals must protect women and children’s rights. A deal that goes against the rights of women is unacceptable.

We call upon all governments to ensure free, compulsory education all over the world for every child. We call upon all the governments to fight against terrorism and violence. To protect children from brutality and harm. We call upon the developed nations to support the expansion of education opportunities for girls in the developing world. We call upon all communities to be tolerant, to reject prejudice based on caste, creed, sect, color, religion or agenda to ensure freedom and equality for women so they can flourish. We cannot all succeed when half of us are held back. We call upon our sisters around the world to be brave, to embrace the strength within themselves and realize their full potential.

Dear brothers and sisters, we want schools and education for every child’s bright future. We will continue our journey to our destination of peace and education. No one can stop us. We will speak up for our rights and we will bring change to our voice. We believe in the power and the strength of our words. Our words can change the whole world because we are all together, united for the cause of education. And if we want to achieve our goal, then let us empower ourselves with the weapon of knowledge and let us shield ourselves with unity and togetherness.

So let us wage, so let us wage a glorious struggle against illiteracy, poverty and terrorism, let us pick up our books and our pens, they are the most powerful weapons. One child, one teacher, one book and one pen can change the world. Education is the only solution. Education first. Thank you.”