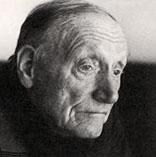 Warren was one of the founders of New Criticism. He was also a charter member of the Fellowship of Southern Writers. He founded the influential literary journal The Southern Review with Cleanth Brooks in 1935. He received the 1947 Pulitzer Prize for the Novel for his novel All the King’s Men (1946) and the Pulitzer Prize for Poetry in 1958 and 1979. He is the only person to have won Pulitzer Prizes for both fiction and poetry.

TRUE LOVE
Robert Penn WarrenIn silence the heart raves.  It utters words
Meaningless, that never had
A meaning.  I was ten, skinny, red-headed,
Freckled.  In a big black Buick,
Driven by a big grown boy, with a necktie, she sat
In front of the drugstore, sipping something
Through a straw. There is nothing like
Beauty. It stops your heart.  It
Thickens your blood.  It stops your breath.  It
Makes you feel dirty.  You need a hot bath.
I leaned against a telephone pole, and watched.
I thought I would die if she saw me.
How could I exist in the same world with that brightness?
Two years later she smiled at me.  She
Named my name. I thought I would wake up dead.
Her grown brothers walked with the bent-knee
Swagger of horsemen.  They were slick-faced.
Told jokes in the barbershop. Did no work.
Their father was what is called a drunkard.
Whatever he was he stayed on the third floor
Of the big white farmhouse under the maples for twenty-five years.
He never came down.  They brought everything up to him.
I did not know what a mortgage was.
His wife was a good, Christian woman, and prayed.
When the daughter got married, the old man came down wearing
An old tail coat, the pleated shirt yellowing.
The sons propped him.  I saw the wedding.  There were
Engraved invitations, it was so fashionable.  I thought
I would cry.  I lay in bed that night
And wondered if she would cry when something was done to her.
The mortgage was foreclosed. That last word was whispered.
She never came back.  The family
Sort of drifted off.  Nobody wears shiny boots like that now.
But I know she is beautiful forever, and lives
In a beautiful house, far away.
She called my name once.  I didn’t even know she knew it

You will have to wait. Until it. Until The last owl hoot has quavered to a

Vibrant silence and you realize there is no breathing Beside you, and dark curdles toward dawn. Until

Drouth breaks, too late to save the corn, But not too late for flood, and the dog-fox, stranded

On a sudden islet, barks in hysteria in the alder-brake.

Until the doctor enters the waiting room, and His expression betrays all, and you wish He’d take his God-damned hand off your shoulder. Until

The woman you have lived with all the years Says, without rancor, that life is the way life is, and she

Had never loved you, had believed the lie only for the sake of the children.

Until you become uncertain of French irregular verbs And by a strange coincidence begin to take Catholic instruction from Monsignor O’Malley, who chews a hangnail. Until

You realize, truly, that our Saviour died for us all, And as tears gather in your eyes, you burst out laughing,

For the joke is certainly on Him, considering What we are. Until

You pick the last alibi off, like a scab, and Admire the inwardness, as beautiful as inflamed flesh

Or summer sunrise. Until you
Remember, suprisingly, that common men have done good deeds. Until it

Grows on that, at least, God
Has allowed us the grandeur of certain utterances.