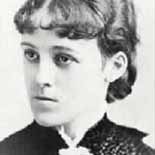 She was nominated for the Nobel Prize in Literature in 1927, 1928 and 1930. Wharton combined her insider’s view of America’s privileged classes with a brilliant, natural wit to write humorous, incisive novels and short stories of social and psychological insight. She was well acquainted with many of her era’s other literary and public figures, including Theodore Roosevelt.

Life, like a marble block, is given to all,
A blank, inchoate mass of years and days,
Whence one with ardent chisel swift essays
Some shape of strength or symmetry to call;
One shatters it in bits to mend a wall;
One in a craftier hand the chisel lays,
And one, to wake the mirth in Lesbia’s gaze,
Carves it apace in toys fantastical.

But least is he who, with enchanted eyes
Filled with high visions of fair shapes to be,
Muses which god he shall immortalize
In the proud Parian’s perpetuity,
Till twilight warns him from the punctual skies
That the night cometh wherein none shall see.