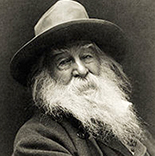 A humanist, he was a part of the transition between transcendentalism and realism, incorporating both views in his works. Whitman is among the most influential poets in the American canon, often called the father of free verse. His work was very controversial in its time, particularly his poetry collection Leaves of Grass, which was described as obscene for its overt sexuality.

Born on Long Island, Whitman worked as a journalist, a teacher, a government clerk, and—in addition to publishing his poetry—was a volunteer nurse during the American Civil War. Early in his career, he also produced a temperance novel, Franklin Evans (1842).

Whitman’s major work, Leaves of Grass, was first published in 1855 with his own money. The work was an attempt at reaching out to the common person with an American epic. He continued expanding and revising it until his death in 1892. After a stroke towards the end of his life, he moved to Camden, New Jersey, where his health further declined. He died at age 72 and his funeral became a public spectacle.

Whitman’s sexuality is often discussed alongside his poetry. Though biographers continue to debate his sexuality, he is usually described as either homosexual or bisexual in his feelings and attractions. However, there is disagreement among biographers as to whether Whitman had actual sexual experiences with men. Whitman was concerned with politics throughout his life. He supported the Wilmot Proviso and opposed the extension of slavery generally. His poetry presented an egalitarian view of the races, and at one point he called for the abolition of slavery, but later he saw the abolitionist movement as a threat to democracy.

A SONG OF MYSELF
Walt Whitman
(Excerpt from part 20)

Shall I pray? Shall I venerate and be ceremonious?
I have pried through the strata and analyzed to a hair,
And counseled with doctors and calculated close and found no
sweeter fat than sticks to my own bones.
In all people I see myself, none more and not one a barleycorn less,
And the good or bad I say of myself I say of them.
And I know I am solid and sound,
To me the converging objects of the universe perpetually flow,
All are written to me, and I must get what the writing means.
And I know I am deathless,
I know this orbit of mine cannot be swept by a carpenter’s compass,
I know I shall not pass like a child’s carlacue cut with a burnt stick at night.
I know I am august,
I do not trouble my spirit to vindicate itself or be understood,
I see that the elementary laws never apologize,
I reckon I behave no prouder than the level I plant my house by after all.
I exist as I am, that is enough,
if no other in the world be aware I sit content,
And if each and all be aware I sit content.
One world is aware, and by far the largest to me, and that is myself,
And whether I come to my own body today or in ten thousand or ten million years,
I can cheerfully take it now, or with equal cheerfulness I can wait.
My foothold is tenoned and mortised in granite,
I laugh at what you call dissolution,
And I know the amplitude of time.

I SAW IN LOUISIANA A LIVE-OAK GROWING
Walt Whitman

I saw in Louisiana a live-oak growing,
All alone stood it and the moss hung down from the
branches,
Without any companion it grew there uttering joyous leaves
of dark green,
And its look, rude, unbending, lusty, made me think of
myself,
But I wonder’d how it could utter joyous leaves standing
alone there without its friend near, for I knew I could not,
And I broke off a twig with a certain number of leaves upon
it, and twined around it a little moss,
And brought it away, and I have placed it in sight in
my room,
It is not needed to remind me as of my own dear friends,
(For I believe lately I think of little else than of them,)
Yet it remains to me a curious token, it makes me think of
manly love;
For all that, and though the live oak glistens there in
Louisiana solitary in a wide flat space,
Uttering joyous leaves all its life without a friend a
lover near,
I know very well I could not.

O CAPTAIN! my Captain! our fearful trip is done;
The ship has weathered every rack, the prize we sought is won;
The port is near, the bells I hear, the people all exulting,
While follow eyes the steady keel, the vessel grim and daring:
But O heart! heart! heart!
O the bleeding drops of red,
Where on the deck my Captain lies,
Fallen cold and dead.

O Captain! my Captain! rise up and hear the bells;
Rise up—for you the flag is flung—for you the bugle trills;
For you bouquets and ribbon’d wreaths—for you the shores a-crowding;
For you they call, the swaying mass, their eager faces turning;
Here Captain! dear father!
This arm beneath your head;
It is some dream that on the deck,
You’ve fallen cold and dead.

My Captain does not answer, his lips are pale and still;
My father does not feel my arm, he has no pulse nor will;
The ship is anchor’d safe and sound, its voyage closed and done;
From fearful trip, the victor ship, comes in with object won;
Exult, O shores, and ring, O bells!
But I, with mournful tread,
Walk the deck my Captain lies,
Fallen cold and dead.