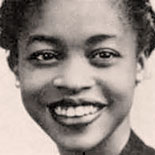 She was part of the African-American literary movement in Chicago. Her notable works include the award-winning poem For My People (1942) and the novel Jubilee (1966), set in the South during the American Civil War.

There were bizarre beginnings in old lands for the making
of me. There were sugar sands and islands of fern and
pearl, palm jungles and stretches of a never-ending sea.

There were the wooing nights of tropical lands and the cool
discretion of flowering plains between two stalwart
hills. They nurtured my coming with wanderlust. I
sucked fevers of adventure through my veins with my
mother’s milk.

Someday I shall go to the tropical lands of my birth, to the
coasts of continents and the tiny wharves of island
shores. I shall roam the Balkans and the hot lanes of
Africa and Asia. I shall stand on mountain tops and
gaze on fertile homes below.

And when I return to Mobile I shall go by the way of
Panama and Bocas del Toro to the littered streets and
the one-room shacks of my old poverty, and blazing suns
of other lands may struggle then to reconcile the pride
and pain in me.

WE HAVE BEEN BELIEVERSMargaret Walker

And in the white gods of a new land we have been believers
believing in the mercy of our masters and the beauty of
our brothers, believing in the conjure of the humble
and the faithful and the pure.

Neither the slaves’ whip nor the lynchers’ rope nor the
bayonet could kill our black belief. In our hunger we
beheld the welcome table and in our nakedness the
glory of a long white robe. We have been believers in
the new Jerusalem.

We have been believers feeding greedy grinning gods, like a
Moloch demanding our sons and our daughters, our
strength and our wills and our spirits of pain. We have
been believers, silent and stolid and stubborn and
strong.

We have been believers yielding substance for the world.
With our hands have we fed a people and out of our
strength have they wrung the necessities of a nation.
Our song has filled the twilight and our hope has
heralded the dawn.

Now we stand ready for the touch of one fiery iron, for the
cleansing breath of many molten truths, that the eyes
of the blind may see and the ears of the deaf may hear
and the tongues of the people be filled with living fire.

Where are our gods that they leave us asleep? Surely the
priests and the preachers and the powers will hear.
Surely now that our hands are empty and our hearts too
full to pray they will understand. Surely the sires of
the people will send us a sign.

We have been believers believing in our burdens and our
demigods too long. Now the needy no longer weep and
pray; the long-suffering arise, and our fists bleed
against the bars with a strange insistency.