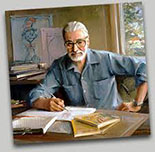 Theodor Seuss Geisel (March 2, 1904 – September 24, 1991) was an American writer, poet, and cartoonist most widely known for his children’s books written under the pen names Dr. Seuss, Theo LeSieg and, in one case, Rosetta Stone.

Geisel published 46 children’s books, which were often characterized by imaginative characters, rhyme, and frequent use of anapestic meter. His most celebrated books include the bestselling Green Eggs and Ham, The Cat in the Hat, One Fish Two Fish Red Fish Blue Fish, Horton Hatches the Egg, Horton Hears a Who!, and How the Grinch Stole Christmas!. Numerous adaptations of his work have been created, including 11 television specials, four feature films, a Broadway musical and four television series. He won the Lewis Carroll Shelf Award in 1958 for Horton Hatches the Egg and again in 1961 for And to Think That I Saw It on Mulberry Street. Geisel also worked as an illustrator for advertising campaigns, most notably for Flit and Standard Oil, and as a political cartoonist for PM, a New York City newspaper. During World War II, he worked in an animation department of the United States Army, where he wrote Design for Death, a film that later won the 1947 Academy Award for Documentary Feature.

He was a perfectionist in his work and he would sometimes spend up to a year on a book. It was not uncommon for him to throw out 95% of his material until he settled on a theme for his book. For a writer he was unusual in that he preferred to only be paid after he finished his work rather than in advance.

Geisel’s birthday, March 2, has been adopted as the annual date for National Read Across America Day, an initiative on reading created by the National Education Association.

Congratulations!
Today is your day.
You’re off to Great Places!
You’re off and away!

You have brains in your head.
You have feet in your shoes
You can steer yourself
any direction you choose.
You’re on your own. And you know what you know.
And YOU are the guy who’ll decide where to go.

You’ll look up and down streets. Look ’em over with care.
About some you will say, “I don’t choose to go there.”
With your head full of brains and your shoes full of feet,
you’re too smart to go down any not-so-good street.

And you may not find any
you’ll want to go down.
In that case, of course,
you’ll head straight out of town.

It’s opener there
in the wide open air.

Out there things can happen
and frequently do
to people as brainy
and footsy as you.

You’ll be on your way up!
You’ll be seeing great sights!
You’ll join the high fliers
who soar to high heights.

You won’t lag behind, because you’ll have the speed.
You’ll pass the whole gang and you’ll soon take the lead.
Wherever you fly, you’ll be the best of the best.
Wherever you go, you will top all the rest.

Except when you don’t
Because, sometimes, you won’t.

I’m sorry to say so
but, sadly, it’s true
and Hang-ups
can happen to you.

You can get all hung up
in a prickle-ly perch.
And your gang will fly on.
You’ll be left in a Lurch.

You’ll come down from the Lurch
with an unpleasant bump.
And the chances are, then,
that you’ll be in a Slump.

And when you’re in a Slump,
you’re not in for much fun.
Un-slumping yourself
is not easily done.

And IF you go in, should you turn left or right…
or right-and-three-quarters? Or, maybe, not quite?
Or go around back and sneak in from behind?
Simple it’s not, I’m afraid you will find,
for a mind-maker-upper to make up his mind.

You can get so confused
that you’ll start in to race
down long wiggled roads at a break-necking pace
and grind on for miles across weirdish wild space,
headed, I fear, toward a most useless place.
The Waiting Place…

Waiting for the fish to bite
or waiting for wind to fly a kite
or waiting around for Friday night
or waiting, perhaps, for their Uncle Jake
or a pot to boil, or a Better Break
or a string of pearls, or a pair of pants
or a wig with curls, or Another Chance.
Everyone is just waiting.

Somehow you’ll escape
all that waiting and staying.
You’ll find the bright places
where Boom Bands are playing.

With banner flip-flapping,
once more you’ll ride high!
Ready for anything under the sky.
Ready because you’re that kind of a guy!

Oh, the places you’ll go! There is fun to be done!
There are points to be scored. there are games to be won.
And the magical things you can do with that ball
will make you the winning-est winner of all.
Fame! You’ll be famous as famous can be,
with the whole wide world watching you win on TV.

Except when they don’t.
Because, sometimes, they won’t.

I’m afraid that some times
you’ll play lonely games too.
Games you can’t win
’cause you’ll play against you.

All Alone!
Whether you like it or not,
Alone will be something
you’ll be quite a lot.

And when you’re alone, there’s a very good chance
you’ll meet things that scare you right out of your pants.
There are some, down the road between hither and yon,
that can scare you so much you won’t want to go on.

On and on you will hike
and I know you’ll hike far
and face up to your problems
whatever they are.

You’ll get mixed up, of course,
as you already know.
You’ll get mixed up
with many strange birds as you go.
So be sure when you step.
Step with care and great tact
and remember that Life’s
a Great Balancing Act.
Just never forget to be dexterous and deft.
And never mix up your right foot with your left.

So…
be your name Buxbaum or Bixby or Bray
or Mordecai Ali Van Allen O’Shea,
you’re off to Great Places!
Today is your day!
Your mountain is waiting.
So…get on your way!