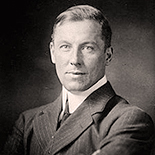 My days are haunted by the thought
Of men in coils of Justice caught
With stone and steel, in chain and cell,
Of men condemned to living hell,–
Yet blame them not.

In my sun-joy their dark I see:
For what they are and had to be
Blame Nature, red in tooth and claw,
Blame laws beyond all human law,
–Blame Destiny.

Behind blind walls I see them go,
Grim spectres of eternal woe,
Drained grey of hope, dead souls of self-slain,–
And yet I know with pang of pain
It must be so.

I know that brother’s blood they’ve spilt,
And sons of Cain must pay their guilt;
I know the deviltries that stem
From dark abyss we must condemn;
I know that but for heaven’s grace
We might be rotting in their place:
–God pity them!

I haled me a woman from the street,
Shameless, but, oh, so fair!
I bade her sit in the model’s seat
And painted her sitting there.

I hid all traces of her heart unclean;
I painted a babe at her breast;
I painted her as she might have been
If the Worst had been the Best.

She laughed at my picture and went away.
Then came, with a knowing nod,
A connoisseur, and I heard him say;
“’Tis Mary, the Mother of God.”

So, I painted a halo round her hair,
And I sold her and took my fee,
And she hangs in the church of Saint Hillaire,
Where you and all may see.