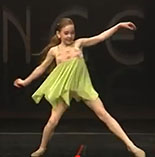 Holly began her career in the Broadway production of Billy Elliot at the age of 11 as Sharon Percy (Ballet Girl) and continued in the role for almost 2 years. She is currently playing the role of Paige Jennings in the FX television series The Americans.