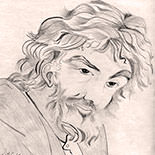 Shams-i-Tabrīzī or Shams al-Din Mohammad (1185–1248) was a Persian Muslim, who is credited as the spiritual instructor of Mewlānā Jalāl ad-Dīn Muhammad Balkhi, also known as Rumi and is referenced with great reverence in Rumi’s poetic collection, in particular Diwan-i Shams-i Tabrīzī (The Works of Shams of Tabriz). Tradition holds that Shams taught Rumi in seclusion in Konya for a period of forty days, before fleeing for Damascus. The tomb of Shams-i Tabrīzī was recently nominated to be a UNESCO World Heritage Site.