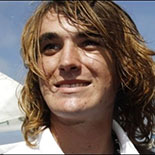 Zachary Tristan “Zac” Sunderland (born November 29, 1991) is an American sailor who was the first person under the age of 18 to sail solo around the world.

Sunderland completed his trip after 13 months and 2 days at sea on July 16, 2009 at age 17. The record was previously held by Australian David Dicks, and was surpassed on August 27, 2009 by Michael Perham of England. Sunderland is the youngest American to complete a circumnavigation, surpassing Brian Caldwell, who finished in 1996 at age 20. However, Sunderland’s record was not recognized by Guinness World Records, or by the World Sailing Speed Record Council.