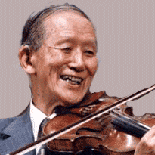 Shinichi Suzuki (October 17, 1898 – January 26, 1998) was the inventor of the international Suzuki method of music education and developed a philosophy for educating people of all ages and abilities.

Considered an influential pedagogue in music education of children, he often spoke of the ability of all children to learn things well, especially in the right environment, and of developing the heart and building the character of music students through their music education.

Before his time, it was rare for children to be formally taught classical instruments from an early age and even more rare for children to be accepted by a music teacher without an audition or entrance examination. Not only did he endeavor to teach children the violin from early childhood and then infancy, his school in Matsumoto did not screen applicants for their ability upon entrance.

During his lifetime, he received several honorary doctorates in music including from the New England Conservatory of Music (1956), and the Oberlin College Conservatory of Music, was proclaimed a Living National Treasure of Japan, and was nominated for the Nobel Peace prize.