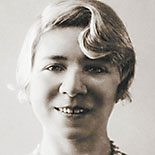 Alfonsina Storni (May 29, 1892 – October 25, 1938) was one of the most important Argentine and Latin-American poets of the modernist period.

I never thought that God had any form.Absolute the life; and absolute the norm.Never eyes: God sees with the stars. Never hands: God touches with the seas. Never tongue: God speaks with sparkles.I will tell you, don’t be startled;I know that God has parasites: things and men.

I caught you by the neck
on the shore of the sea, while you shot
arrows from your quiver to wound me
and on the ground I saw your flowered crown.

I disemboweled your stomach like a doll’s
and examined your deceitful wheels,
and deeply hidden in your golden pulleys
I found a trapdoor that said: sex.

On the beach I held you, now a sad heap,
up to the sun, accomplice of your deeds,
before a chorus of frightened sirens.
Your deceitful godmother, the moon
was climbing through the crest of the dawn,
and I threw you into the mouth of the waves.