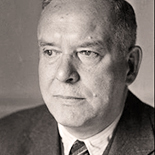 Wallace Stevens (October 2, 1879 – August 2, 1955) was an American Modernist poet. He was born in Reading, Pennsylvania, educated at Harvard and then New York Law School, and he spent most of his life working as an executive for an insurance company in Hartford, Connecticut. He won the Pulitzer Prize for Poetry for his Collected Poems in 1955.

More than any other modern poet, Stevens was concerned with the transformative power of the imagination. Composing poems on his way to and from the office and in the evenings, Stevens continued to spend his days behind a desk at the office, and led a quiet, uneventful life.

Though now considered one of the major American poets of the century, he did not receive widespread recognition until the publication of his Collected Poems, just a year before his death.

The poem is the cry of its occasion,
Part of the res itself and not about it.
The poet speaks the poem as it is,

Not as it was: part of the reverberation
Of a windy night as it is, when the marble statues
Are like newspapers blown by the wind. He speaks

By sight and insight as they are. There is no
Tomorrow for him. The wind will have passed by,
The statues will have gone back to be things about.

The mobile and immobile flickering
In the area between is and was are leaves,
Leaves burnished in autumnal burnished trees

In the end, in the whole psychology, the self,
the town, the weather, in a casual litter,
Together, said words of the world are the life of the world.

THE DOVE IN THE BELLY
Wallace Stevens

The whole of appearance is a toy. For this,
The dove in the belly builds his nest and coos,
Selah, tempestuous bird. How is it that
The rivers shine and hold their mirrors up,
Like excellence collecting excellence?
How is it that the wooden trees stand up
And live and heap their panniers of green
And hold them round the sultry day? Why should
These mountains being high be, also, bright,
Fetched up with snow that never falls to earth?
And this great esplanade of corn, miles wide,
Is something wished for made effectual
And something more. And the people in costumes,
Though poor, though raggeder than ruin, have that
Within them right for terraces—oh, brave salut!
Deep dove, placate you in your hiddenness.

Some things, niño, some things are like this,
That instantly and in themselves are gay
And you and I are such things, O most miserable…

For a moment they are gay and are a part
Of an element, the exactest element for us,
In which we pronounce joy like a word of our own.

It is there, being imperfect, and with these things
And erudite in happiness, with nothing learned,
That we are joyously ourselves and we think

Without the labor of thought, in that element,
And we feel, in a way apart, for a moment, as if
There was a bright scienza outside of ourselves,

A gaiety that is being, not merely knowing,
The will to be and to be total in belief,
Provoking a laughter, an agreement, by surprise.