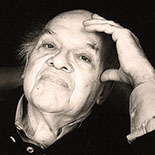 The author of twenty collections of poetry and four books of essays, Stern has taught literature and creative writing at Temple University, Indiana University of Pennsylvania, Raritan Valley Community College, and Iowa Writers’ Workshop. Since 2009, Stern has been distinguished poet-in-residence and a member of the faculty of Drew University ’​s graduate program for a Master of Fine Arts (MFA) in poetry.

Stern received the National Book Award for Poetry in 1998 for This Time: New and Selected Poems, and was named as a finalist in 1991 for the Pulitzer Prize in Poetry for Leaving Another Kingdom: Selected Poems. In 2000, New Jersey Governor Christine Todd Whitman appointed Stern as the state’s first poet laureate.

I remember Galileo describing the mind
as a piece of paper blown around by the wind,
and I loved the sight of it sticking to a tree
or jumping into the backseat of a car,
and for years I watched paper leap through my cities;
but yesterday I saw the mind was a squirrel caught crossing
Route 80 between the wheels of a giant truck,
dancing back and forth like a thin leaf,
or a frightened string, for only two seconds living
on the white concrete before he got away,
his life shortened by all that terror, his head
jerking, his yellow teeth ground down to dust.

It was the speed of the squirrel and his lowness to the ground,
his great purpose and the alertness of his dancing,
that showed me the difference between him and paper.
Paper will do in theory, when there is time
to sit back in a metal chair and study shadows;
but for this life I need a squirrel,
his clawed feet spread, his whole soul quivering,
the hot wind rushing through his hair,
the loud noise shaking him from head to tail.
O philosophical mind, O mind of paper, I need a squirrel
finishing his wild dash across the highway,
rushing up his green ungoverned hillside.

THE PREACHER [AS IF THE ONE TREE YOU LOVE]
Gerald Stern

you must tire I
said to Peter always hearing the same
trees sung the same words singing, the same
heart breaking I said and con permission
I will change trees though I am almost eighty
now, but what the hell, there probably are
others along the river, though there was a point
when social security was kicking in I didn’t
go to the palms nor did I go to Boca
to traffic in herons nor did I go to Miami
where my people walk around in scary
black suits and hats perched over their other hats
just in case and just in case nor did I
go to California nor stay in Iowa nor
buy a farmhouse in the Pioneer Valley
south of Brattleboro, thanks God, thanks God—

and Peter interrupts me remembering a
squirrel in Iowa that bit all the daisies,
a mad squirrel of sorts but certes  no madder
than our own hot shots with their squirrel rifles killing
squirrels from two miles up at wedding parties
of all things, of all things—

and that’s what you
mean by a hole in the universe, isn’t it, Peter
asks and he remembers the garden we built
and what we planted, how I went to the K-Mart
and bought the cardboard planters and plastic trays
and how we built a fence—give way to groundhogs
ye black potatoes and brown tomatoes, and ah
the railroad ties there planted in gravel and it
was a hole he dug—I came home one day and
he was into it up to his knees—

and Peter is
tall, and he remembers the cosmos, I the
delphiniums, but both of us hated that squirrel,
eating a daisy on the highest limb of
my apple tree, the one that died, and she just
laughing and giving us the finger, and on my
cell phone he remembers how we drove to
the kingdom of used lawn mowers, I on the way
yelling out the window to every mower
of hill and valley, how much will you take for
that lawn mower, that lawn mower, for
there is progress, n’est-ce pas, isn’t there
Peter, I used to hate green grass but now I
almost adore it, and what about the holes in
Europe and Asia I ask—

what of the holes in
this or that heart, he says—

I say repair it!

He says, and are you going to plant a Berber,
clever of hand, to cut the colored marble
and know how it looks a distance of five miles
as in that notebook you scratch away with your black
and red ballpoint you are so proud of, just like
the Berber chipping away knowing in your knuckles
what it will look like when it’s finished, each scratch
critical though it’s not as if you were writing
by the laws of Plato—perish the thought—it is
what it is—and you will look at it, you and me,
and say “that’s right,” not even, “that’s what I had
in mind,” for it is your knuckles that write, still blessed
by suppleness, if not your hips, if not
your knees, God bless your knees, God bless the cartilage,
God bless the ligaments—you with your hole in the universe,
so weird and extreme.

Peter says this, and he
and I trail off and since he gave me a tape
of Leonard Cohen with a voice so deep it shook
my red Honda, I thought therein did it lie,
something about Vienna, something Brooklyn,
her torn blue raincoat—or his—I can’t get the gender
right, the facts don’t add up, it’s Jane  and it rhymes
with Lili Marlene, that famous lamppost, the same
nostalgia, his song or hers, Peter loves the turn
and does his preacherly voice, we have just half
a minute or so to talk and throw sentences
at one another, “no-one knows what it means,”
that is his favorite, “no-one can understand it,”
“we walk around in a fog,” I say that,
“and live in a mist,” “we are in a Russian
sweat house, climbing the bleachers, breathing pure steam.”
“It’s like the smoke,” he says, “in a Chinese painting,
there are the mountains and there is the hut you’ll live in,
you barely can see the trees in the little gorge
left side of the hut, the green intense,
the tops of fir trees almost touching the steep
broken path;” “it’s like living in a cloud,”
I say, “though the sun is shining, whatever that
means, when you’re healthy and money in your pocket,
and walking five miles an hour by your favorite
body of water it’s hard to remember the cloud,
you are so sure of yourself.”

“What made you think
of a hole the way you did?” he asks.

“My figures
always start with the literal and the spreading
is like blood spreading,” I say, “and as for the wound it
comes from growing up with coal, the murder
of everything green, rivers burning, cities
emptied, humans herded, the vile thinking
of World War I and II, the hole in England,
the hole in Germany, and what we can’t en-
dure, the hole in Japan, Truman, the third
assistant baker’s helper, he should pick at
his harp in Hell, when I read about
Tamurlane, say, and how he piled up the heads,
and David and the Moabites, he made them
lie down to see who was longer or shorter and put
half of them to death, it had to do with
ropes, he may have piled up skulls for all
I know, and Samuel the prophet loved him to pieces,
and Herman Cortez and Genghis Kahn, but also,
I hate to say it, private Sharon, pig
Ariel, and the Lebanese jaunt, a massacre,
as I remember—let’s not forget the names,
Sabra and Shatila”—