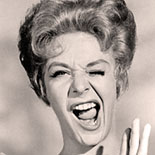 Born Catherine Louise Stephens, her big break in show business came at the Riviera Hotel in Las Vegas, when the headliner for the night, Debbie Reynolds, became ill and Stevens filled in for the night. She then went on to do small shows at the Plaza Hotel’s Persian Room, New York’s Waldorf Astoria, and Caesars Palace on the Las Vegas Strip. She went on to appear on such television game shows as Match Game, Hollywood Squares, Celebrity Sweepstakes, The Price is Right, and Password.