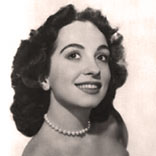 She has recorded since she was 15 years old. Her most popular solo recording was her RCA Victor recording of “I’m in Love Again” (music and lyrics by Cole Porter). Accompanied by an orchestra arranged and conducted by Henri René, Stevens’ recording peaked at No. 6 on the pop chart in 1951.

Stevens returned to the U.S. chart in 1959 with the song “Teach Me Tiger”, which caused a minor uproar for its sexual suggestiveness and consequently did not receive airplay on many radio stations. The song peaked at No. 86 on the Hot 100. Stevens’ recording of this song is often erroneously accredited to Marilyn Monroe. The tune was featured in the 2006 film Blind Dating.

She is best known for her 1963 Atco Records recording of “Deep Purple” (music by Peter DeRose and lyrics by Mitchell Parish) with her brother Antonino LoTempio (singing under the stage name Nino Tempo). A standard song that Larry Clinton and His Orchestra and band vocalist Bea Wain had popularized in 1939, the Stevens and Tempo version reached No.1 on the Hot 100 on November 16, 1963, and No.17 in the British charts. The song won the 1964 Grammy Award for Best Rock and Roll Recording. It sold over one million copies, and was awarded a gold disc.

They also enjoyed a 1964 follow-up hit in the U.S. with the standard song “Whispering” (music by Vincent Rose and lyrics by Richard Coburn and John Schonberger). The recording, which had an arrangement similar to their recording of “Deep Purple”, reached No. 11 on the Hot 100 singles chart. They also had chart success with “All Strung Out”, which reached No. 26 on the American Hot 100 in 1966. Later that year a single “The Coldest Night of the Year” was released on Atlantic 584048 in Great Britain. A solo single by Stevens was issued in December 1967, a double-sided single of “Wanting You” with “Falling in Love Again” on MGM 1366 in the UK and MGM K 13825 in the US. “Wanting You” became a Northern soul classic.