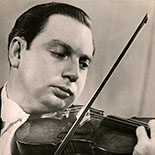 Isaac Stern (July 21, 1920 – September 22, 2001) was a Soviet-born violinist and conductor. He was renowned for his recordings and for discovering new musical talent.

Stern maintained close ties with Israel. Stern began performing in the country in 1949. In 1973, he performed for wounded Israeli soldiers during the Yom Kippur War. During the 1991 Gulf War and Iraq’s Scud missile attacks on Israel, he played in the Jerusalem Theater. During his performance, an air raid siren sounded, causing the audience to panic. Stern then stepped onto the stage and began playing a movement of Bach. The audience then calmed down, donned gas masks, and sat throughout the rest of his performance. Stern was a supporter of several educational projects in Israel, among them the America-Israel Foundation and the Jerusalem Music Center.