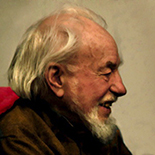 As a poet, he authored a dozen books from 1953 to 2006, writing in epigrammatic style about things in his everyday life. As an editor, he was always affiliated with The New York Times in some capacity, mainly in the magazine and book reviews, from 1957 to 2005.

GREEN APPLE: STILL LIFE III
Harvey ShapiroWhat will come of it
all that light
the light of the lemons
the three pale suns?

and then the dark resemblances begin.

I hear the music from the street Every night. Sequestered at my desk, My luminous hand finding the dark words. Hard, very hard. And the music From car radios is so effortless. And so I strive to join my music To that music. So that The air will carry my voice down The block, across the bridge, Through the boroughs where people I love Can hear my voice, saying to them Through the music that their lives Are speaking to them now, as mine to me.