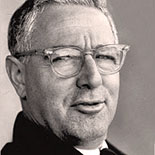 That note comes clear, like water running clear,
Then the next higher note, and up and up
And more and more, with now and then a chord,
The highest notes like tapping a tile with a hammer,
Now and again an arpeggio, a theme
As if the keyboard spoke to the one key,
Saying, No interval is exactly true,
And the note whines slightly and then truly sings.

She sits on the sofa reading a book she has brought,
A ray of sunlight on her white hair.
She is here because he is blind. She drives.
It is almost a platitude to say
That she leads him from piano to piano.
And this continues for about an hour,
Building bridges from both sides of the void,
Coasting the chasms of the harmonies.

And in conclusion,
When there is no more audible dissent,
He plays his comprehensive keyboard song,
The loud proud paradigm,
The one work of art without content.

THE RECOGNITION OF EVEKarl Shapiro

Whatever it was she had so fiercely fought
Had fled back to the sky, but still she lay
With arms outspread, awaiting its assault,
Staring up through the branches of the tree,
The fig tree. Then she drew a shuddering breath
And turned her head instinctively his way,
She had fought birth as dying men fight death.

Her sign awakened him. He turned and saw
A body swollen, as though formed of fruits,
White as the flesh of fishes, soft and raw.
He hoped she was another of the brutes
So he crawled over and looked into her eyes,
The human wells that pool all absolutes,
It was like looking into double skies.

And when she spoke the first word (it was thou)
He was terror-stricken, but she raised her hand
And touched his wound where it was fading now,
For he must feel the place to understand.
Then he recalled the longing that had torn
His side, and while he watched it whitely mend,
He felt it stab him suddenly like a thorn.

He thought the woman had hurt him. Was it she
Or the same sickness seeking to return;
Or was there any difference, the pain set free
And she who seized him now as hard as iron?
Her fingers bit his body. She looked old
And involuted, like the newly born.
He let her hurt him till she loosed her hold.

Then she forgot him and she wearily stood
And went in search of water through the grove.
Adam could see her wandering through the wood,
Studying her footsteps as her body wove
In light and out of light. She found a pool
And there he followed shyly to observe.
She was already turning beautiful.