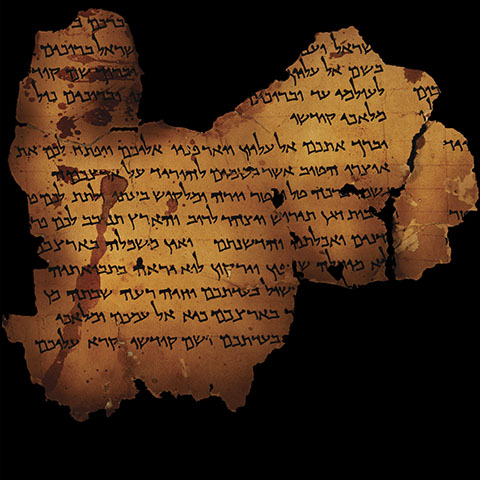 The Dead Sea Scrolls, in the narrow sense of Qumran Caves Scrolls, are a collection of some 981 different texts discovered between 1946 and 1956 in eleven caves from the immediate vicinity of the ancient settlement at Khirbet Qumran in the West Bank. The caves are located about 2 kilometres inland from the northwest shore of the Dead Sea, from which they derive their name.

The texts are of great historical, religious, and linguistic significance because they include the third oldest known surviving manuscripts of works later included in the Hebrew Bible canon, along with deuterocanonical and extra-biblical manuscripts which preserve evidence of the diversity of religious thought in late Second Temple Judaism. There are only two silver scrolls which contain biblical text and are older than the Dead Sea Scrolls; The silver scrolls were excavated in Jerusalem at Ketef Hinnom and date from around 600 BCE. A burnt piece of Leviticus dating from the 5th century has recently been analyzed and is the fourth oldest piece of the Torah known to still exist.

Most of the texts are written in Hebrew, with some in Aramaic (in different regional dialects, including Nabataean), and a few in Greek. If discoveries from the Judean desert are included, Latin (from Masada) and Arabic (from Khirbet al-Mird) can be added. Most texts are written on parchment, some on papyrus and one on copper.

On September 25, 2011 the Israel Museum Digital Dead Sea Scrolls site went online. It gives users access to searchable, high-resolution images of the scrolls, as well as short explanatory videos and background information on the texts and their history. As of May 2012, five complete scrolls from the Israel Museum have been digitized for the project and are now accessible online: the Great Isaiah Scroll, the Community Rule Scroll, the Commentary on Habakkuk Scroll, the Temple Scroll, and the War Scroll.