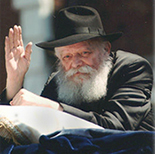 Rabbi Menachem Mendel Schneerson (April 5, 1902 – June 12, 1994), known as the Lubavitcher Rebbe, was the seventh and last Rebbe (Hasidic leader) of the Chabad-Lubavitch movement.

He led the movement until his death in 1994, greatly expanding its worldwide activities and founding a worldwide network of institutions to spread traditional Judaism among the Jewish people. These institutions include schools, kindergartens, synagogues and Chabad houses. He successfully built a network of more than 3,600 institutions in over 70 countries and 1000 cities around the world.During his lifetime some of his followers had considered him to be the Jewish Messiah but Rabbi Schneerson mildly discouraged such talk.

He was recognized as a contributor to Jewish continuity and religious thought, and recognized by both the Orthodox and Reform movements, as the pioneer of Jewish outreach. In addition to being a highly respected religious leader, he was also an accomplished scholar in mathematics and science.