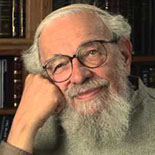 Zalman Meshullam Schachter-Shalomi, commonly called “Reb Zalman”, (August 28, 1924 – July 3, 2014) was one of the founders of the Jewish Renewal movement and an innovator in ecumenical dialogue.

Born in Zhovkva, Poland (now Ukraine) and raised in Vienna, he was interned in detention camps under the Vichy French and fled the Nazi advance by coming to the United States in 1941. He was ordained as an Orthodox rabbi in 1947 within the Chabad Lubavitch Hasidic community while under the leadership of the sixth Lubavitcher Rebbe, Yosef Yitzchok Schneersohn, and served Chabad congregations in Massachusetts and Connecticut. He subsequently earned an M.A. in psychology of religion at Boston University, and a doctorate from the Reform-run Hebrew Union College. 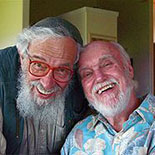 Reb Zalman was initially sent out to speak on college campuses by the Lubavitcher Rebbe, but left after experimenting with “the sacramental value of lysergic acid”, the main ingredient in LSD, from 1962. With subsequent rise of the hippie movement in the 1960s, and exposure to Christian mysticism, he moved away from the Chabad lifestyle.

While pursuing a course of study at Boston University (including a class taught by Howard Thurman), he experienced an intellectual and spiritual shift. In 1968, on sabbatical from the Near Eastern and Judaic studies department of the University of Manitoba in Winnipeg, he joined a group of other Jews in founding a havurah (small cooperative congregation) in Somerville, Massachusetts, called Havurat Shalom. He eventually left the Lubavitch movement altogether, and founded his own organization known as B’nai Or, meaning the “Children of Light” or, more literally, “Sons of Light” in Hebrew, a title he took from the Dead Sea Scrolls writings. During this period he was known to his followers as the “B’nai Or Rebbe”, and the rainbow prayer shawl he designed 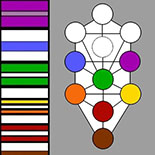 for his group was known as the “B’nai Or tallit”. Both the havurah experiment and B’nai Or came to be seen as the early stirrings of the Jewish Renewal movement. The congregation later changed its name to the more gender neutral, “P’nai Or” meaning “Faces of Light”, and it continues under this name.

In later years, Shachter-Shalomi held the World Wisdom Chair at The Naropa Institute; he was Professor Emeritus at both Naropa and Temple University. He also served on the faculty of the Reconstructionist Rabbinical College, Omega, the NICABM and many other major institutions. He was founder of the ALEPH Ordination Programs and ALEPH: Alliance for Jewish Renewal. The seminary he founded has ordained over 80 rabbis and cantors.

Schachter-Shalomi was among the group of rabbis, from a wide range of Jewish denominations, who traveled together to India to meet with the Dalai Lama and discuss diaspora survival for Jews and Tibetan Buddhists with him. Tibetans, exiled from their homeland for more than three generations, face some of the same assimilation challenges experienced by Jewish diaspora. The Dalai Lama was interested in knowing how the Jews had survived with their culture intact. That journey was chronicled in Rodger Kamenetz’ 1994 book The Jew in the Lotus.