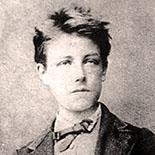 Rimbaud influenced modern literature and arts, inspired various musicians, and prefigured surrealism. He started writing poems at a very young age, while still in primary school, and stopped completely before he turned 21. He was mostly creative in his teens (17–20). His “genius, its flowering, explosion and sudden extinction, still astonishes”.

Rimbaud was known to have been a libertine and for being a restless soul. He traveled extensively on three continents before his death from cancer just after his thirty-seventh birthday.

It has been found again.
What? – Eternity.
It is the sea fled away
With the sun.

Sentinel soul,
Let us whisper the confession
Of the night full of nothingness
And the day on fire.

From human approbation,
From common urges
You diverge here
And fly off as you may.

Since from you alone,
Satiny embers,
Duty breathes
Without anyone saying: at last.

Here is no hope,
No entreaty here.
Knowledge and fortitude,
Torture is certain.

It has been found again.
What? – Eternity.
It is the sea fled away
With the sun.

While the red spittle of the grape-shot
Whistles all day in the infinite blue sky:
While the battalions, scarlet or green, fly,
By the King who jeers, en masse, into the pot:

While the terrible stupidity grinds and crushes,
And makes a smoking heap of a thousand men:
– Poor Dead! In summer, among the rushes,
In your joy, sacred Nature, who created them!…

– There’s a God, who laughs at altar-cloths
Of damask, incense, and great gold chalices:
Who dozes to Hosannas for lullaby,

And wakes when mothers, gathered in their grief,
Weeping under their old black bonnets, sigh
And yield Him the coin knotted in their handkerchief.