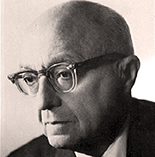 The term Objectivist was first coined for him. The two-volume Testimony was based on court records and explored the black experience in the United States. He followed this with Holocaust (1975), based on court testimony about Nazi death camps during World War II.

When Louis Zukofsky was asked by Harriet Monroe to provide an introduction to what became known as the Objectivist issue of Poetry, he contributed his essay, Sincerity and Objectification: With Special Reference to the Work of Charles Reznikoff. This established the name of the loose-knit group of 2nd generation modernist poets and the two characteristics of their poetry: sincerity and objectification.

The solid houses in the mist
are thin as tissue paper;
the water laps slowly at the rocks;
and the ducks from the north are here
at rest on the grey ripples.

The company in which we went
so free of care, so carelessly,
has scattered. Good-bye,
to you who lie behind in graves,
to you who galloped proudly off!
Pockets and heart are empty.

This is the autumn and our harvest—
such as it is, such as it is—
the beginnings of the end, bare trees and barren ground;
but for us only the beginning:
let the wild goat’s horn and the silver trumpet sound!

The work of our hearts is dust
to be blown about in the winds
by the God of our dead in the dust
but our Lord delighting in life
(let the wild goat’s horn
and the silver trumpet sound!)
our God Who imprisons in coffin and grave
and unbinds the bound.

You have loved us greatly and given us
Your laws
for an inheritance,
Your sabbaths, holidays, and seasons of gladness,
distinguishing Israel
from other nations—
distinguishing us
above the shoals of men.
And yet why should we be remembered—
if at all—only for peace, if grief
is also for all? Our hopes,
if they blossom, if they blossom at all, the petals
and fruit fall.

You have given us the strength
to serve You,
but we may serve or not
as we please;
not for peace nor for prosperity,
not even for length of life, have we merited
remembrance; remember us
as the servants
You have inherited.

One night in April or May,
his daughter saw someone’s hand
make the curtain which was drawn tightly across her window bulge
and ran to the adjoining room in her night clothes
where he and his son were sitting.
He ran around the house one way
and his son ran the other way
and they found a Negro
under a workbench
within six or eight feet of the window
holding a piece of plank before his face—
begging them not to shoot.

The Negro was dead
when the doctors examined him.
They found upon his belly
bruises:
he died, the doctor said, of peritonitis.

The jailer testified that the Negro had been brought to the jail
charged with burglary;
but no warrant for his arrest was produced
and the jailer did not know—or tell—
who brought him.
The Negro said that a crowd of men
had taken him from a store to the woods
and whipped him
with “a buggy trace.”

He was not treated by a doctor, the jailer, or anybody:
just put into the jail and left there to die.
The doctor who saw him first—on a Monday—
did nothing for him
and said that he would not die of a his beating;
but he did die of it on Wednesday.
Many thanks for your attention.