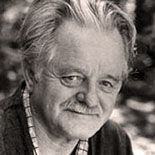 Rexroth is regarded as a central figure in the San Francisco Renaissance, and paved the groundwork for the movement. Although he did not consider himself to be a Beat poet, and disliked the association, he was dubbed the “Father of the Beats” by Time. He was among the first poets in the United States to explore traditional Japanese poetic forms such as haiku.

His poetry is marked by a sensitivity to Asian forms as well as an appreciation of Ancient Greek lyric poetry, particularly that of Sappho. Rexroth’s poetic voice is similar to that of Tu Fu (whom he translated), expressing indignation with the inequities of the world from an existential vantage.

During the 1970s Rexroth, along with the scholar Ling Chung, translated the notable Song Dynasty poet Li Ch’ing-chao and an anthology of Chinese women poets, titled The Orchid Boat.

Rexroth died in Santa Barbara in 1982. He had spent his final years translating Japanese and Chinese women poets, as well as promoting the work of female poets in America and overseas. He is buried on the grounds of the Santa Barbara Cemetery Association overlooking the sea, and while all the other graves face inland, his alone faces the Pacific. His epitaph reads, “As the full moon rises / The swan sings in sleep / On the lake of the mind.”

With The Love Poems of Marichiko, Kenneth Rexroth claimed to have translated the poetry of a contemporary, “young Japanese woman poet,” but it was later disclosed that he was the author, and he gained critical recognition for having conveyed so authentically the feelings of someone of another gender and culture. 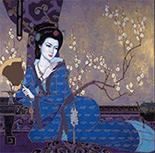 Marichiko is the pen name of a contemporary young woman who lives near the temple of Marishi-ben in Kyoto. Marishi-ben is an Indian, pre-Ayryan goddess of the dawn who is a bodhisattva in Buddhism and patron of geisha, prostitutes, women in childbirth, and lovers. Few temples or shrines to her or even statues exist in Japan, but her presence is indicated by statues, often in avenues like sphinxes, of wild boars, who draw her chariot. She has three faces: the front of compassion, one side, a sow; the other a woman in orgasm. She is popular, though hidden deity of tantric, Tachigawa Shingon, and as the Light of Lights, the shakti, the Power of Bliss of Vairocana (the primordial Buddha, Dainichi Nyorai), seated in sexual bliss.

A sampling of Marichiko’s poems: