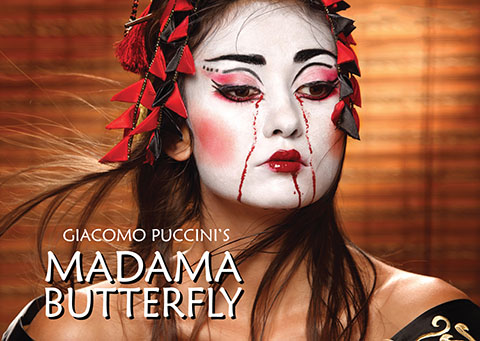 Madama Butterfly (Madame Butterfly) is an opera in three acts (originally two acts) by Giacomo Puccini, with an Italian libretto by Luigi Illica and Giuseppe Giacosa. The libretto of the opera is based in part on the short story “Madame Butterfly” (1898) by John Luther Long – which in turn was based partially on stories told to Long by his sister Jennie Correll and partially on the French novel Madame Chrysanthème by Pierre Loti.

Long’s short story was dramatized by David Belasco as a one-act play, Madame Butterfly: A Tragedy of Japan (1900). After premiering in New York, Belasco’s play moved to London, where Puccini saw it in the summer of 1900.

The original version of the opera, in two acts, had its premiere on February 17, 1904 at La Scala in Milan. It was very poorly received despite the presence of such notable singers as soprano Rosina Storchio, tenor Giovanni Zenatello and baritone Giuseppe De Luca in the lead roles. This was due in large part to the late completion and inadequate time for rehearsals. Puccini revised the opera, splitting the second act into two acts and making other changes. On May 28, 1904, this version was performed in Brescia and was a huge success.

Between 1915 and 1920, Japan’s best-known opera singer Tamaki Miura won international fame for her performances as Cio-Cio San. Her statue, along with that of Puccini, can be found in the Glover Garden in Nagasaki, the city where the opera is set.

Madama Butterfly is a staple of the standard operatic repertoire for companies around the world, ranking 7th in the Operabase list of the most-performed operas worldwide.