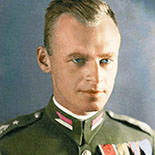 Witold Pilecki (May 13, 1901 – May 25, 1948) was a Polish soldier, a rittmeister of the Polish Cavalry during the Second Polish Republic, the founder of the Secret Polish Army (Tajna Armia Polska) resistance group in German-occupied Poland in November 1939, and a member of the underground Home Army (Armia Krajowa), which was formed in February 1942. As the author of Witold’s Report, the first intelligence report on Auschwitz concentration camp, Pilecki enabled the Polish government-in-exile to convince the Allies that the Holocaust was taking place.

During World War II, he volunteered for a Polish resistance operation to get imprisoned in the Auschwitz death camp in order to gather intelligence and escape. While in the camp, Pilecki organized a resistance movement and as early as 1941, informed the Western Allies of Nazi Germany’s Auschwitz atrocities. He escaped from the camp in 1943 after nearly 2 and a half years of imprisonment. Pilecki took part in the Warsaw Uprising in August 1944. He remained loyal to the London-based Polish government-in-exile and was executed in 1948 by the Stalinist secret police Urząd Bezpieczeństwa on charges of working for “foreign imperialism”, thought to be a euphemism for MI6. Until 1989, information on his exploits and fate was suppressed by the Polish communist regime.

As a result of his deeds, he is considered as “one of the greatest wartime heroes”. In the foreword to the book The Auschwitz Volunteer: Beyond Bravery Michael Schudrich, the Chief Rabbi of Poland, wrote as follows: “When God created the human being, God had in mind that we should all be like Captain Witold Pilecki, of blessed memory.” In the introduction to that book Norman Davies, a British historian, wrote: “If there was an Allied hero who deserved to be remembered and celebrated, this was a person with few peers.” At the commemoration event of International Holocaust Remembrance Day held in the US Holocaust Memorial Museum on January 27, 2013 Ryszard Schnepf, the Polish Ambassador to the US, described Pilecki as a “diamond among Poland’s heroes” and “the highest example of Polish patriotism”.