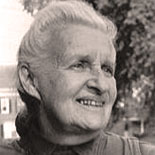 A transcript of a 1964 conversation with Peace Pilgrim from a broadcast on KPFK radio in Los Angeles, California, was published as “Steps Toward Inner Peace”. She stopped counting miles in that year, having walked more than 40,000 km (25,000 mi) for peace. 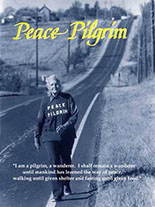 In the book, “Peace Pilgrim: Her Life and Work in Her Own Words”, she related that her physical journey began after having experienced a “spiritual awakening”, following a long period of meditation practice. She said that this awakening was a direct, mystical experience of the creator’s love. She claimed that this spurred her to then start her decades-long walking journey for peace.

Her pilgrimage spanned almost three decades beginning January 1, 1953, in Pasadena, California. The Korean War was in progress. She continued walking for 28 years, spanning the American involvement in the Vietnam War and beyond. Peace Pilgrim was a frequent speaker at churches, universities, and local and national radio and television.

Expressing her ideas about peace, she referred to herself only as “Peace Pilgrim.” Peace Pilgrim’s only possessions were the clothes on her back and the few items she carried in the pockets of her blue tunic which read “Peace Pilgrim” on the front and “25,000 Miles on foot for peace” on the back. She had no organizational backing, carried no money, and would not even ask for food or shelter. When she began her pilgrimage she had taken a vow to “remain a wanderer until mankind has learned the way of peace, walking until given shelter and fasting until given food.”

On July 7, 1981, while being driven from the Chicago area to a speaking engagement near Knox, Indiana, Peace Pilgrim was killed in an automobile accident. At the time of her death, she was crossing the United States for the seventh time. After her death, her body was cremated, and her ashes were interred in a family plot near Egg Harbor City, New Jersey.

Friends of Peace Pilgrim is an all-volunteer non-profit organization dedicated to making information about the life and message of Peace Pilgrim available freely to all who ask. Since 1983 they have published and distributed over 400,000 copies of the book, Peace Pilgrim: Her Life and Work in Her Own Words, and over one-and-a-half-million copies of the booklet, Steps Toward Inner Peace. Books and booklets have been sent to over 100 countries. The book has been translated into twelve languages and the booklet into over 20 languages.

In 2005 Peace Pilgrim Park was created in her hometown of Egg Harbor City, New Jersey on part of the site of the former Neutral Water Health Resort Sanitarium. Since 2007 an annual Peace Pilgrim Celebration has been observed in the park and at sites throughout Egg Harbor City on September 20–22.