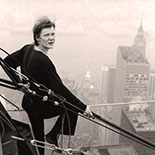 Philippe Petit (born August 13, 1949) is a French high-wire artist who gained fame for his high-wire walk between the Twin Towers of the World Trade Center in New York City, New York, on August 7, 1974. For his feat (which he referred to as “le coup”), he used a 450-pound cable and a custom-made 26-foot long, 55-pound balancing pole.

At an early age he discovered magic and juggling. At 16, he took his first steps on the wire. Petit learned everything by himself as he was being expelled from five different schools. “Within one year,” he told a reporter, “I taught myself to do all the things you could do on a wire. I learned the backward somersault, the front somersault, the unicycle, the bicycle, the chair on the wire, jumping through hoops. But I thought, ‘What is the big deal here? It looks almost ugly.’ So I started to discard those tricks and to reinvent my art.”He also became adept at equestrianism, fencing, carpentry, rock-climbing and the art of bullfighting. Spurning circuses and their formulaic performances, on the sidewalks of Paris he created his street persona. In the early 1970s, he frequently juggled and worked on a slack rope in New York City’s Washington Square Park.