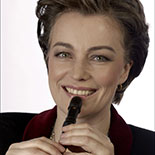 Petri is sought after as a soloist with many noted orchestras, including the Academy of St. Martin in the Fields. She has released 34 recordings, has toured extensively over four continents, and has had dozens of pieces written for her. Her debut as a soloist was in 1969. She is the step-granddaughter of Danish actress Ingeborg Brams.