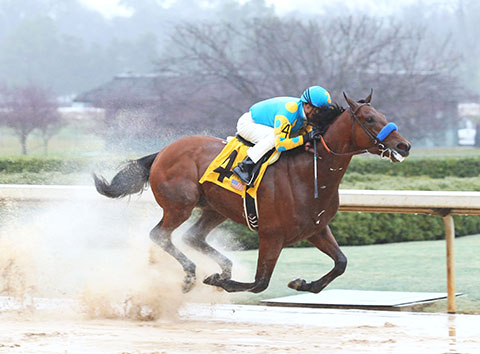 American Pharoah won the Belmont Stakes on June 6, becoming the 12th Triple Crown winner and the first since 1978, ending a “drought” of 37 years. The horse was leaning back in the starting gate when it opened and was a touch late at the start, but he soon pulled out to an early lead, which he maintained for a gate-to-wire win. He steadily increased his lead throughout the race. He was challenged by Materiality until the top of the stretch when Materality faded, ultimately finishing last, and Frosted pulled into second. Keen Ice ran in the middle of the pack until a late rally brought him into third over Mubtaahij, who was fourth. American Pharoah crossed the finish line leading by 5 1⁄2 lengths, with a winning time of 2:26.65 for the 1 1⁄2-mile (2,400 m) race. His margin of victory was the fourth-largest ever for a Triple Crown winner at the Belmont.